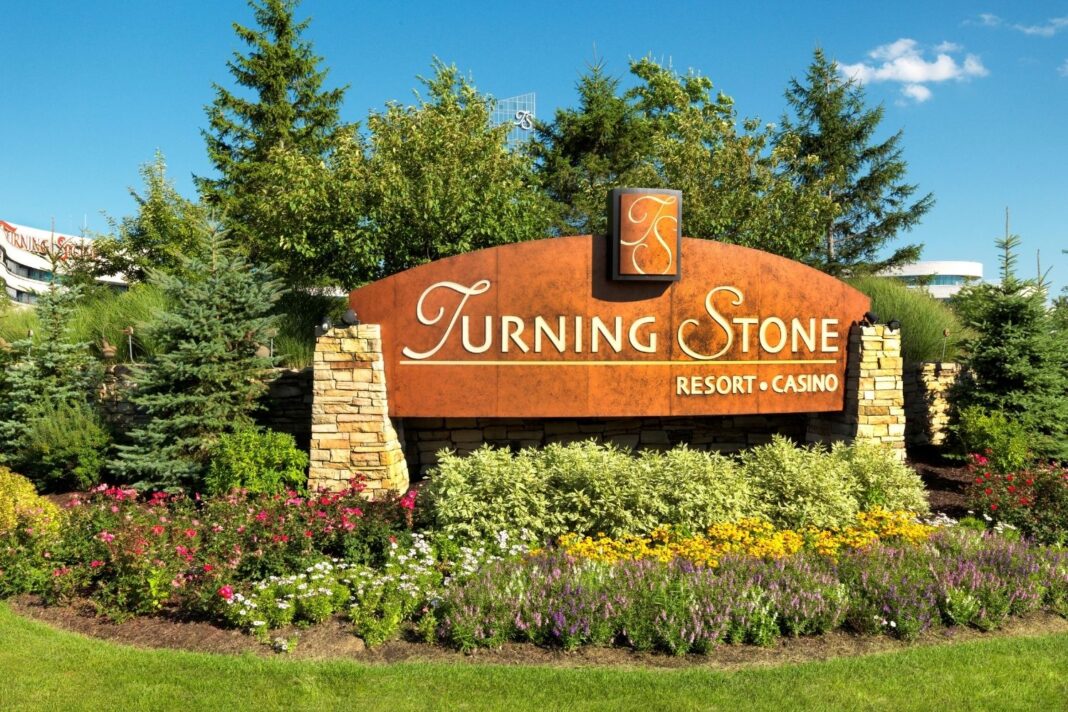 The Turning Stone Resort and Casino is located in Verona, NY, just a stone throw away after getting off at exit 33 on the New York State Thruway. From humble beginnings, it has grown into an extremely nice, full service resort and casino.

Turning Stone opened on July 16, 1993, and is owned by the Oneida Indian Nation. When the casino first opened its doors, it was little more than a roomful of some touch screen, slot machine type of games and a few table games. Since then, Turning Stone has developed into a mega-complex, including three hotels on site, a plethora of video gaming stations, huge rows of table games of all sorts, shopping, dining and even a couple of full service spas.

The Tower hotel is a 19-story structure that juts majestically into the otherwise undisturbed countryside skyline. The turning Stone hotel is the original lodging at the casino for paroli roulette strategy and The Lodge at Turning Stone is very elegant, cozy lodging, particularly great for a romantic getaway.

The entertainment selections at Turning Stone are quite varied and include some truly top rate acts. From current big names, such as Josh Groban and Michael Buble to legendary artists, such as Engelbert Humperdink and Kenny Rogers, there is never a dearth of entertainment options.

Turning Stone also has its own laugh room, the LOL Comedy Club. There are standup comedy shows here every Wednesday night. The LOL is situated inside of the Lava Lounge, an upscale dance club.

There are three golf courses on the grounds, one of which hosts a PGA tour event each year. If you’re a golfer, you need to check out these courses, as they are quite beautiful in their design.

While Turning Stone offers several restaurant selections, such as Wildflowers and the Forest Grill Steakhouse, their buffet dining at Season’s Harvest is quite economical and very good. At breakfast, lunch or dinner, Season’s Harvest offers a wide variety of food, but what is more important is that the fare is all fresh and top quality.

Turning Stone offers all the typical table games and a nice selection of video poker, all sorts of touch screen games and a big poker room. Even if you play strictly table games, make sure when you visit to get their Diamond Card. This card is necessary to play the video games, but not required to play at the tables. You will want to have the card, though, as if you give it to the pit boss at the table, you will be credited with some pretty decent comps.

Overall, the Turning Stone Resort and Casino has come a long way in its 17 years of existence. As it stands right now, it is a highly recommended, fun way to spend an evening or a weekend. Get off the Thruway at exit 33 and check it out.

New York: the Perfect Place for a City Break

Stepping foot for the very first time on the iconic sidewalks of New York can be a thrilling experience. It is also a rather bewildering one, faced as you are with a teeming mass of pedestrians and traffic and the almost constant blast of sirens and horns. The pace of life here is nothing short of frantic and it takes some time to get used to, but once the initial shock has worn away you will soon find yourself immersed in all the excitement this city has to offer.

Getting around the city

Navigating New York’s streets loaded with luggage (or even better, shopping!) is never easy even for the seasoned New Yorker. Hailing a cab is really the only sensible option and with the odd exception the city’s cab drivers are friendly, informative and eager to please. Cabs are a safer prospect than the underground, certainly at night and particularly for women travelling alone. The city’s crime record has greatly improved over the past decade but there is a nervous energy on the streets here that can be found nowhere else.

Although New York consists of five boroughs; Manhattan, Staten Island, Brooklyn, Queens and the Bronx, it is the island of Manhattan that houses many of the city’s famous attractions. In spite of its relative smallness it is in many ways Manhattan that is seen as the epitome of New York life and a magnet for tourists worldwide. Because much of what makes New York great can be found on Manhattan it is an ideal base for your stay.

The Empire State Building is considered by many to be the New York landmark. Once the tallest building in the world it stands one thousand four hundred and fourteen feet above street level and on a clear day gives views of up to forty miles away. Opened during the Great Depression in 1931 it is everything you would expect of a modern world wonder, containing one hundred and two storeys and a breathtaking one thousand eight hundred and sixty steps. A lift is the only possible method of reaching the top and this will whisk you to the eightieth floor in a matter of seconds. The views from the open terrace are nothing short of spectacular, particularly at night, when the city becomes a twinkling canopy of lights and neon signs. Here you will find romance with a capital R and it is almost impossible to leave without thinking of Tom Hanks’ top-floor tryst with Meg Ryan in the film Sleepless in Seattle. But be warned; the queues here as for many of Manhattan’s attractions are long and require patience and determination, particularly if you have children in tow.

If shopping is high on your agenda then New York will undoubtedly seem like paradise. It houses a plethora of department stores and the most famous of these, Macy’s, Bloomingdale’s and Saks, can all be found in central Manhattan. Simply browsing through the shops is entertainment in itself but the fabulous window displays, particularly those that decorate Fifth Avenue make some kind of purchase inevitable. Spending money here is certainly harder to resist than in most cities, particularly as brand names and designer labels are considerably cheaper than elsewhere. Whether your fancy be for art, antiques, jewellery or gadgets, the malls and boutiques of New York are sure to please.

Other notable attractions include The Metropolitan Museum of Art, Carnegie Hall, The Museum of Modern Art and perhaps the most celebrated landmark of all; The Statue of Liberty. A more sobering experience is to be had at the Ground Zero Museum Workshop. However this is also a place of peace and tranquility and there is a genuine feeling of New Yorkers pulling together and looking towards the future with hope

Undoubtedly New York is overwhelming, a colourful, cosmopolitan mixture of glitz, glamour and energy. It is also a city of contrasts, where power and affluence rub shoulders with great poverty. That said however there is nowhere else quite like it and its iconic landmarks and exuberance will certainly provide you with an unforgettable experience.